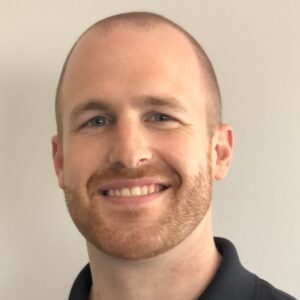 Nate is a Physical Therapist and Battle Creek native who now lives in Portage. He earned his BS in Kinesiology at Michigan State University in 2012, and his Doctorate in Physical Therapy at Grand Valley State University, graduating in 2015. Since graduating he has lived and worked in Schaumburg, IL and Ashland, OR, and returned to West Michigan in July 2020 to be closer to family.

Nate is very interested in treating the spine, and is near completion on his McKenzie Mechanical Diagnosis and Therapy (MDT), which is primarily used to treat mechanical pathology of the spine and extremities. He is also interested in treating chronic pain using Therapeutic Neuroscience Education (TNE), and has taken several continuing education courses centered around chronic pain.

In his free time Nate loves spending time with his wife Ali and newborn daughter Georgia, who has stolen his heart and most of his sleep. Hobbies include playing alto saxophone and guitar, and running with his two dogs, Stella and Apollo. He is also a huge Michigan State fan, and has attended 2 Final Fours and a College Football Playoff game watching his Spartans.